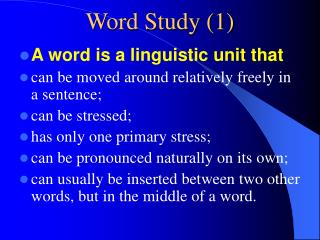 Word Study (1). A word is a linguistic unit that can be moved around relatively freely in a sentence; can be stressed; has only one primary stress; can be pronounced naturally on its own; can usually be inserted between two other words, but in the middle of a word. Levels of Words.

What’s that Word? - . by tom redd see if you can figure out each of the following word puzzles. have fun! (press the

Word Formation in English - . conversion conversion is a main type of word-formation assigning the base to a different

Short Story Unit Literary Terms - . plot. the sequence of events that make up a story, usually centering around a main

Word Study - . strategy instruction in action. what is word study?. a student-centered approach to phonics, spelling, and