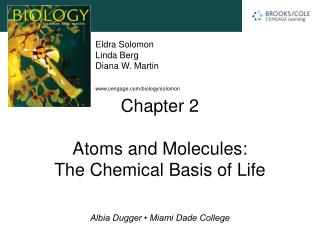 Chapter 2 Atoms and Molecules: The Chemical Basis of Life. Chemistry and Life. All organisms share fundamental similarities in their chemical composition and basic metabolic processes The structure of atoms determines the way they form chemical bonds to produce complex compounds Chapter 1 - . matter. 1.1 atoms and molecules. at the end of this topic, students should be able to:. identify and