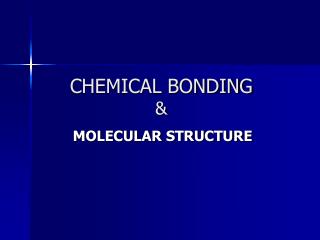 CHEMICAL BONDING &. MOLECULAR STRUCTURE. What is a Chemical Bond?. It will take us the next two chapters to answer this question!. Bonds are forces that hold groups of atoms together and make them function as a unit. [25 words or less, but leaves out LOTS of details!].

Core build up and Amalgam bonding - . 12 th october. learning outcomes. to know the definition of a core build up. to