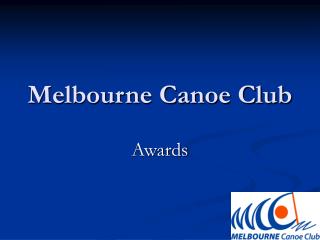 Melbourne Canoe Club. Awards. Most tireless working committee member. Runner up. Simon Greaves for all his work with as treasurer. Winner . Peter Grant . Who must be looking for a new job after spending so much of his work time doing MCC projects. Melbourne Canoe Club - . strategic direction. june 2008. vision. to be widely regarded as the most successful

Toronto Island Canoe Club - . ticc is located in an urban wilderness steps from the ward’s island ferry docks. our goal

Melbourne Football Club - . about melbourne fc. melbourne was made in 1859 they have one of the best players that was

Melbourne Football Club - . about melbourne fc. melbourne was made in 1859 they have one of the best players that was jim

Canoe sprint - . history. in the middle of the 19 th century canoe and kayak races were first held in the olympics. there

Canoe Trip - Jackpine paddle is 100% northern-owned. explore the canadian north on a guided canoe or kayak trip. we would

Teen Canoe Trip - . the teens will be going on a 5 mile canoe trip this saturday, august 11 th . you need to be at the