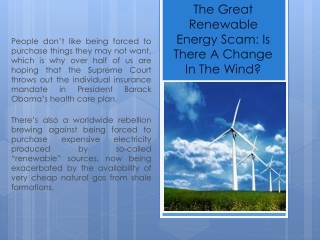 People don’t like being forced to purchase things they may not want, which is why over half of us are hoping that the Supreme Court throws out the individual insurance mandate in President Barack Obama’s health care plan. There’s also a worldwide rebellion brewing against being forced to purchase expensive electricity produced by so-called “renewable” sources, now being exacerbated by the availability of very cheap natural gas from shale formations. Renewable Energy Certificates - . a concept developed under the electricity act, 2003 and national action plan on climate

RENEWABLE SOURCES ENERGY - . renewable energy . at the moment, most of the world's energy comes from non-renewable fossil

Renewable/Non-renewable Resources Activity - . adapted from unc-wilmington curriculum. what is a renewable energy

Renewable Energy - . what is meant by renewable energy?. it is the energy that can be taken from some renewed natural

Renewable energy resources - . grade 6 electricity unit. re-cap…. what are some examples of renewable resources? what