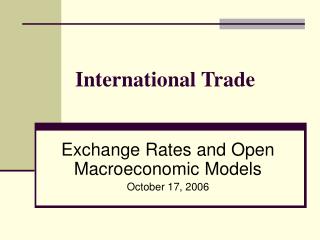 TOPIC 7 International Trade - . definitions:. trade or trading:. refers to the transactions or the exchanges of ownership

Jan.Hoffmann@UNCTAD Geneva, May 2010 - The demand and supply of international transport services: the relationships

British Empire and International Relations Today - Why is it important to start with the empire? influence on: people