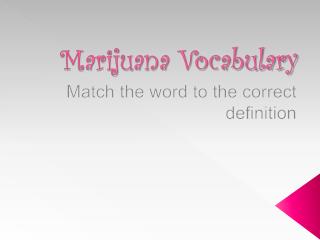 Marijuana Vocabulary. Match the word to the correct definition. A drug, which when used, may lead to the use of more addictive substances. Gateway Drug (B ). Word Up! Vocabulary Instruction in the 21st Century Classroom - This is my presentation to accompany my (one day) tier 2