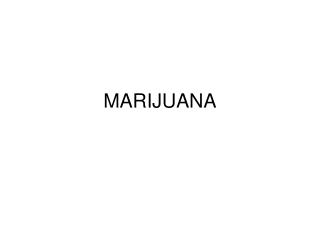 MARIJUANA. What is Marijuana????. A mixture of the dried and shredded leaves, stems , and flowers of the hemp plant. Marijuana has a chemical in it called tetrahydocannabinol (THC) which is the mind altering ingredient The Brain’s Response to Drugs - . an power point “magazine”. marijuana. hi, my name is c/sgt cadet. welcome to my

What You’ll Learn - . 1. explain the harmful effects of inhalants. 2. describe the physical and emotional effects of

Chapter 7 - . drug use and abuse. did you know?. an estimated 20.1 million people in the u.s. currently use illicit

Organizing and Message Development to Push Back Against Medi-pot Sue Thau CADCA Public Policy Consultant - . the

Marijuana Legalization Issues: Where Can We Go? - . a roadmap for public health success and an appeal for a smart