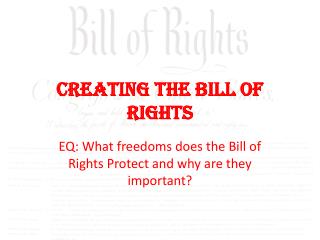 Creating the Bill of Rights Creating the Bill of Rights. EQ: What freedoms does the Bill of Rights Protect and why are they important?. 1788  Ratification of the Constitution 1789  1 st Presidential Election: George Washington: President John Adams: Vice President.

Creating the Bill of Rights

Chapter 2 - . legal aspects of investigation. learning objectives. explain the historical evolution of the laws of arrest