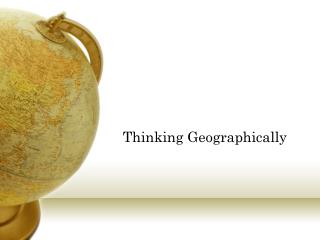 Thinking Geographically. Why is each point on Earth unique?. Place: Unique Location of a Feature Toponym is the name given to a place on Earth Site is the physical character of a place. Includes climate, water sources, topography, soil, vegetation, latitude, and elevation.

Geog111, Thinking about thinking - . we’re going to use several exercises to think about how we know the “world”

Introduction to Unit 1 - . geography…its nature &amp; perspectives. where does geography come from?. first named by

Metaphorical Thinking - “life is like a box of chocolates; you never know what you’re gonna get.” -forest gump.

CREATIVE THINKING - . between “critical thinking” and “creative thinking ”. thinking out of the box. exercise.

Thinking and Language - . thinking. another name for thinking is cognition which is defined as all the mental activities

Thinking Critically - . what is critical thinking? “much of our thinking, left to itself, is biased, distorted,

Interdisciplinary Thought Thinking big, thinking small, or not thinking at all - . monty hempel center for environmental

Thinking Critically About Critical Thinking - . on conjugation of cyclically-generated banach spaces. what’s so

Six Thinking Hats - . from the part to the whole from the different/unique to the common from analysis to synthesis. six

TEACHING THINKING - . macgregor shs. overview. why bother to try to teach thinking? what is a thinking skill? which

Critical Thinking - . define critical thinking and discuss why it is an important topic to be addressed by today's