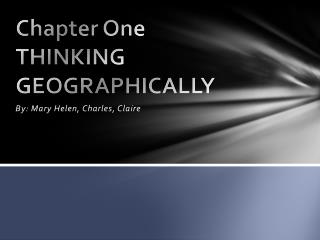 Chapter One THINKING GEOGRAPHICALLY. By: Mary Helen, Charles, Claire. History of Geography. The word geography was invented by the Greek scholar Eratosthenes- He built off the work of Aristotle and Plato “Geo” means Earth and “Graphy” mean to write Roman geographers: Strabo & Ptolemy

Intro to Human Geography - It’s nature and perspective. intro to human geography. geographic questions:. where are

Introduction to Geography - . 8 th grade social studies. when you hear the word “geography”, what comes to mind?.

Bellwork-9/3 - . how do you navigate from place to place?. chapter 1: thinking geographically. key issues. thinking about

INTRODUCTION TO HUMAN GEOGRAPHY - . chapter 1. what is human geography?. the study of how people make places how we

Thinking Geographically - . why is each point on earth unique?. place: unique location of a feature toponym is the name

World Geography Chapter One - . what is geography?. geography vs. h istorians . geography is the study of the

Introduction to Geography - . tori smith block 7. where? why?. the two main questions in geography are where? and why?.