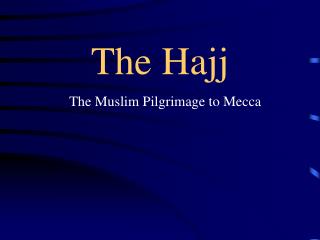 The Hajj. The Muslim Pilgrimage to Mecca. The Hajj begins at the ancient coastal port of Jeddah. For centuries people have been arriving at this city on their way to Mecca. Traditionally pilgrims would have arrived from all over the world by ship. Today most pilgrims arrive by air.

Packages of Umrah and Hajj

The Hajj - . my special journey. modes of transport past and present - history. mind map. h as anyone in the class been

HAJJ: STEP BY STEP - . presented by sheikh riad ouarzazi. agenda. definition of hajj virtues of hajj warning against not

The Hajj - Remember because of translation makkah can have different spellings. the hajj. the muslim’s pilgrimage to

HAJJ - . (pilgrimage to makkah). bashir gul. what is hajj?. hajj is the fifth basic duty of islam. hajj is a visit to the

Hajj Pilgrimage - . joel gebhardt. a pilgrimage to mecca is required among able bodied muslims who can afford it at least

hajj - . layth rustom. what is

Hajj Day by Day - . 3 rd grade presentation. what is hajj. hajj is the fifth pillar of islam. allah( swt ) said in the

The Hajji - . to become a hajji, a muslim must perform the hajj the hajj is a journey to mecca, the holy city of islam

Hajj : PILGRIMAGE TO MECCA- 5 th Pillar of Islam - . pillars of islam. oneness of god and belief in the last prophet