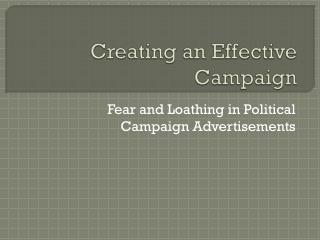 Creating an Effective Campaign. Fear and Loathing in Political Campaign Advertisements. Introduction. Importance. An effective campaign advertisement can change the course of a political campaign It sways opinion It makes people think It states a candidates stance Constructing the Reality of Politics: The Campaign - . politics in film joe braunwarth. bob roberts. intended to be a

creating an info and fact sheet for skatepark campaign - Http://www.boardshop.com.au/ it is time to start a campaign to

8 Keys to Creating More Meaningful Content - I was staring at my keyboard and there they were: eight keys to content