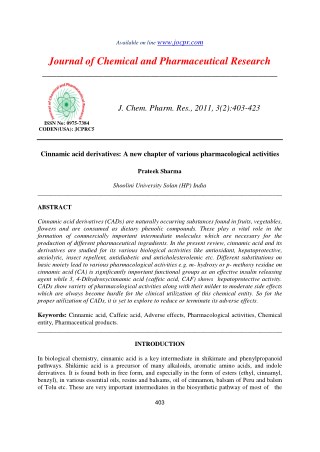 Cinnamic acid derivatives (CADs) are naturally occurring substances found in fruits, vegetables, flowers and are consumed as dietary phenolic compounds. These play a vital role in the formation of commercially important intermediate molecules which are necessary for the production of different pharmaceutical ingradients. In the present review, cinnamic acid and its derivatives are studied for its various biological activities like antioxidant, hepatoprotective, anxiolytic, insect repellent, antidiabetic and anticholesterolemic etc. Different substitutions on
basic moiety lead to various pharmacological activities e.g. m- hydroxy or p- methoxy residue on cinnamic acid (CA) is
ignificantly important functional groups as an effective insulin releasing agent while 3, 4-Dihydroxycinnamic acid (caffeic acid, CAF) shows hepatoprotective activity.
CADs show variety of pharmacological activities along with their milder to moderate side effects which are always become hurdle for the clinical utilization of this chemical entity. So for the proper utilization of CADs, it is yet to explore to reduce or terminate its adverse effects. Acid-Base Titrations - . section 17.3. introduction. definition: in an acid-base titration , a solution containing a

Chapter 16 Acid – Base Equilibria - . contents and concepts. solutions of a weak acid or base 1. acid-ionization

Chapter 16 Acid – Base Equilibria - . end-of-chapter problems: see next page; will answer questions on homework when