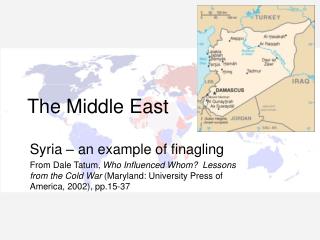 The Middle East. Syria – an example of finagling From Dale Tatum, Who Influenced Whom? Lessons from the Cold War (Maryland: University Press of America, 2002), pp.15-37. Finagling with the SU. SU attempted exploit position as Syria’s main arms supplier 1956

The Middle East - . countries of the middle east. iran, afghanistan,pakistan,tajikistan,

The Middle East - . location: southwest asia at the crossroads of 3 continents. geography. much of the region is desert

The Middle East - Mrshipleysclassroom.wikispaces.com. everything you didn’t want to know but need to pass the test. the