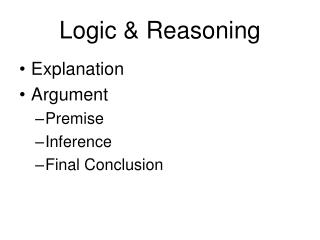 Logic & Reasoning. Explanation Argument Premise Inference Final Conclusion. Bob is barfy. On account that the nurse can give Bob something to help him feel better, therefore, Bob should go to the nurse. Since Fred can type 200 words a minute, he types fast.