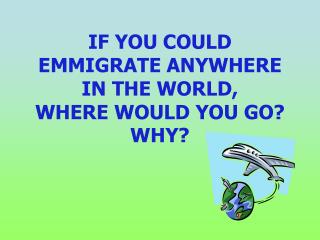 IF YOU COULD EMMIGRATE ANYWHERE IN THE WORLD, WHERE WOULD YOU GO? WHY?. The 3 Waves of Immigration. Historians have identified three time periods of increased immigration rates to the United States. A Virtual Tour of Ellis Island. Found at: http://youtu.be/5rredHTyKaQ. The “Old” Wave.

Where in the World Will You Go? - . hedmark university college norway fall semester 2005. program focus:. norway’s

If You Could go to Antarctica

What if you could: - . take your family to vacations at least twice a year free of charges get your meals at subsidised

“If you could”…… - . by kelton kofford. a cat consumes 28 times its own body weight in food and water a year. the

Where in the world would you love to visit? - . starter ~ a pilgrimage is a journey with a special meaning. pilgrimage is

Thinking Interiorly… If you could live in any state, which one would you choose and why? - . complete the

Where of these would you rather go on vacation? Why did you choose this location? - What activities would you do there?.

Where would you like to go? - . by: brittany bond. choose which city you would like to visit!. barcelona, spain paris,

Where could you find the presentations? - Aacc workshop #2102 [lecture #1] tumor markers: how we use them in the clinic

Why in the World did you go to Siberia ? - . tom peters’ re-imagine: excellence now achieve greatness/iasa2012 san

Where I Would Go if I Could during Winter Break: HAWAII - . a little about

WHAT IF YOU COULD… - . increase sales and move customers through your check out lines quicker? access and manage

What would you do if you were made World President tomorrow? - . baylii rothwell. what would i do if i was made world

If you go online - . it’s been suggested that president obama is. why not?. in small groups. find out what each of the

Where in the World are You? - . sarah wilson. content area: geography grade level: 7 activity summary: students will