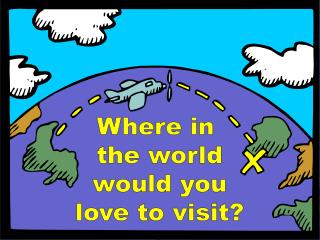 Where in the world would you love to visit?. Starter ~ A pilgrimage is a journey with a special meaning. Pilgrimage is an act of devotion to God and usually involves ritual words and actions. What do you think is the difference between a pilgrimage and a holiday? Love - . many people have mistaken ideas about love which can seriously affect their love life! your marriage and future

Three Powerful Enemies - Do not love the world nor the things in the world. if anyone loves the world, the love of the

GOD S LOVE - God is love. love is god's natureto know true love is to know the one true and living god. some questions.

Love - Family life. love. what is love. haddaway – what is love meatloaf – i would do anything for love michael buble

BELIEVER’S LOVE WORLD - . an. em. th. believer’s love world is a place where we share god’s word reaching out with

Love and Responsibility - . is this the real thing? is this love? is this infatuation?. the love of a mother the love of

One Love, hope for the many One Love, Light for the World One Love that will connect us - One love, only jesus love!.

Happy Mother’s day - . i love you mother love faith and anthony and one of the best mom’s in the world. i love you

Sing His Love - . father, long before creation you had chosen us for love, and that love so deep, so moving draws us

World peace - . is peace in the world possible?. creating peace. together!. what is the goal of the european union?. the

Take the world, but give me Jesus, All its joys are but a name; But His love, abideth ever, - Thru eternal years the

Love Therapist in San Francisco - www.lovetherapycenter.org - Love therapy is about loving yourself, clearing out the

Get your love back by vashikaran - Baba shivanand ji provides solutions for all kind of love related problems like; get