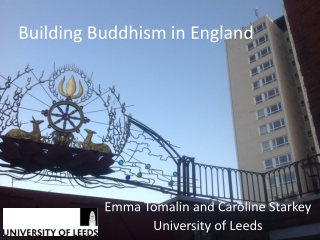 Building Buddhism in England. Emma Tomalin and Caroline Starkey University of Leeds. The Project. To assess the meaning and significance of faith buildings amongst Buddhist communities in England. To

Women in Buddhism - . mahapajapati gotami. was the buddha’s aunt and foster mother was the first to ask for ordination