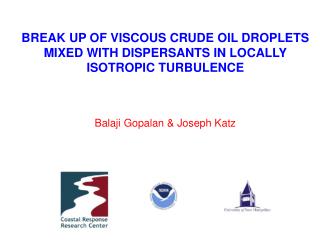 BREAK UP OF VISCOUS CRUDE OIL DROPLETS MIXED WITH DISPERSANTS IN LOCALLY ISOTROPIC TURBULENCE. Balaji Gopalan & Joseph Katz. What is an Oil Spill ?. An oil spill is the release of a liquid petroleum hydrocarbon into the environment