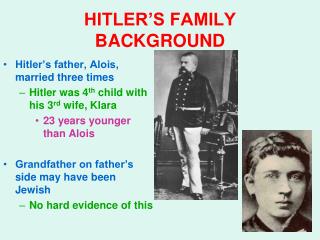 HITLER’S FAMILY BACKGROUND. Hitler’s father, Alois, married three times Hitler was 4 th child with his 3 rd wife, Klara 23 years younger than Alois Grandfather on father’s side may have been Jewish No hard evidence of this. CHILDHOOD. Moved to Leonding from Braunau when Hitler was five

Alfred: The Boy Who Would Be King - (alfred the boy king) (volume 1) [ron smorynski] on amazon.com. *free* shipping on

Adolf Hitler From his birth to the Battle for Stalingrad - . by luke loeffler et249 power point assignment. early life.

Who was Adolf Hitler - . and. winston churchill?. who was this guy?. adolf hitler is one of the most evilest villain's in

Hitler`s Youth - Hitler`s belief that the future of nazi germany was its children . he wanted strong boys and girls,

Adolf Hitler - A brief introduction. adolf hitler. family history and birth. adolf was the son of alois and klara hitler

How similar were Joseph Stalin and Adolf Hitler? - . l/o – to compare the two dictatorships of josef stalin and adolf