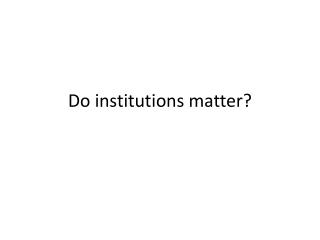 NEW INSTITUTIONAL ECONOMICS (NIE): - . slides are from a presentation made by: mylène kherallah, john maluccio,

Unit IV: Nature of Matter - . lesson 1 atomic theories. objectives. you will be able to – explain how the discovery of

Constitutions and Institutions - . how do they operate? what difference do they make in liberal democracies?. some

Do Institutions matter? Estimating the effect of institutions on economic performance in China - . about authors. ying

Institutions and Entrepreneurship in Transition - . saul estrin, london school of economics. slides for presentation at

Discipline and Punish: The Birth of the Prison 4.1 Complete and Austere Institutions - Schema of the book. part 1: