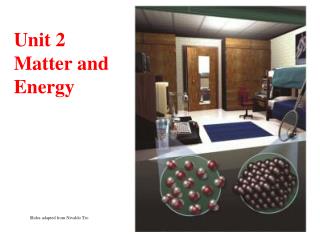 Unit 2 Matter and Energy. Slides adapted from Nivaldo Tro. 3.1 In Your Room. Everything you can see, touch, smell or taste in your room is made of matter . Chemists study the differences in matter and how that relates to the structure of matter. . 3.2 What is Matter?. Unit 2: Matter And Energy - . chemistry. in this science we study matter and the changes it undergoes. matter

Unit 2 – Matter and Energy - . mrs. callender. lesson essential question. how do i calculate energy in a system?.

Unit One: Matter and Energy - . don’t forget your safety quiz is tomorrow!. review lab safety:. what should you do if

Unit 2: Matter - Do now: what do you know about matter? look around the classroom and write down as many things made of

Unit 2: Matter - . what is stuff?. what is matter?. which of the following is matter?. rain snow air electricity breath

Unit 2: Lesson 3 Energy and Matter in Ecosystems - . how do organisms get energy?. matter – anything that has mass and

Chapter 2 Energy and Matter - . 2.4 energy and nutrition. calorimeters. a calorimeter is used to measure heat transfer

Chapter 2 Energy and Matter - . energy makes objects move makes things stop is needed to “do work”. work is done when

Chapter 2 Matter and Energy - Chemistry is the study of matter, its transformations, and the energy changes that

Chapter 2 Matter and Energy - . 2.5 specific heat. the copper on a pan conducts heat rapidly to the food in the