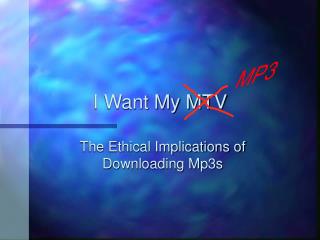 MP3 I Want My MTV The Ethical Implications of Downloading Mp3s What is the RIAA? Recording Industry Association of America Represents +500 companies related to musicians, artists, and producers Members are responsible for 90% of the music released in the U.S.

I want my mom! - . written and illustrated by woody. jake the snake woke up one day and thought his mom had gone

I want my trig made easy - . do now. solve for p:. trigonometry. 3 things you need to know evaluating common angles (the

MOM, I WANT TO CUT MY HAIR - . conversation of mother with son. in california, the mother was tired of explaining to her

I want to epress my joy for: - . -sharing with you guys this time in this beatiful planet. -sharing the excitement

I WANT YOU TO BE MY FRIEND - . q.1-”the battle of jhelum will be remembered in the history of our country’’,said

“I Want…” - . a look at selfishness and service. introduction. at the heart of many of our society’s issues is

I want create my mobile app. Now what? - Many of you have some kind of revolutionary idea for creating a mobile