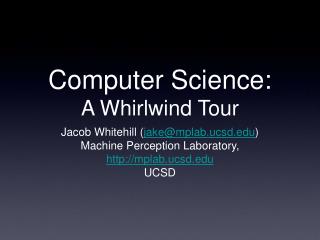 Computer Science: A Whirlwind Tour. Jacob Whitehill ( jake@mplab.ucsd.edu ) Machine Perception Laboratory, http://mplab.ucsd.edu UCSD. Goals of This Talk. Introduce you to the science of computers & computation. Give a super-fast tour of various sub-areas of computer science.

Intro to Computer Science I - . chapter 4 classes, objects, and methods oop concepts. strings (1). a string is a sequence

CS 122 – Jan. 9 - . the nature of computer science general solutions are better what is a program? oo programming broad

Everything I Needed to Know about Programming and Computer Science I Learned from my Teachers - . i. teaching.

Connecting with Computer Science, 2e - . chapter 1 history and social implications of computing. objectives. in this