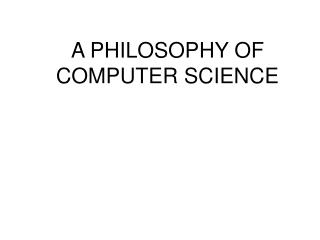 A PHILOSOPHY OF COMPUTER SCIENCE

A PHILOSOPHY OF COMPUTER SCIENCE. Philosophy of Computer Science. Is concerned with those philosophical issues that surround and underpin the academic discipline of computer science. What PCS is not. It is not theoretical computer science.

A PHILOSOPHY OF COMPUTER SCIENCE The field of science in which biology, computer science, and information technology - Biology. bio informatics.

Philosophy of ICT and Islam - . lecture 1: philosophy of science and computing. learning outcomes. understand what the

Connecting with Computer Science, 2e - . chapter 10 file structures. objectives. in this chapter you will: learn what a

What is “cheating” in Computer Science courses? - . akshaye dhawan courtesy april kontostathis. motivation for this