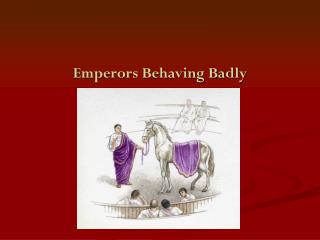 Emperors Behaving Badly. The Julio-Claudians. Augustus unable to produce heir Died in 14 CE "Alas for the Roman people, to be ground by jaws that crunch so slowly!" . Where the Trouble Started…. Augustus’ adopted son Reigned from 14 to 37 CE Never wanted to be emperor

Actors Behaving Badly - . what do you do? change incentives and constraints change institutions change rules of the game.

The struggle for “fairness” in HE: universities behaving badly? - . launch of university of sussex centre for higher

Roman Emperors - . tiberius. claudius. gaius (caligula). nero. succession. in theory, the position of emperor was not

Behaving Like Animals - . carolina biological # 25-1017 part of the physiology strand of the inquiries in science program

Chinese Emperors - . by sara kelmendi. introduction. there are 2 famous emperors shunzhi and kangxi. they are 2 related

The Emperors - . no king!. romans struggled and wove their way through all kinds of political adjustments, but the one