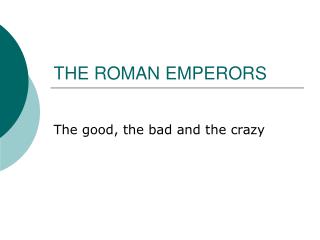 Webmaster: - The roman road. start game!. home. this is a memory mix-and-match game. look carefully at the bible verse,

3 rd 9 Weeks Exam - . test prep. patrician. a member of a wealthy family in the ancient roman republic. dictator. a

MARS - . mars, the &quot;red planet&quot;, is named after the roman god of war because it commonly appears with a

The Rise of the Roman Empire #1 - . *pg. 20-21: directions- copy these notes inside the box that is labeled above onto

Chapter 8: The Rise of Ancient Rome Chapter 8.1: The Roman Republic - . learn about the geography and early settlement of

Revised Roman Missal Workshops - . diocese of altoona-johnstown. why are we here today?. think about the last supper what

Roman Beginnings… - . roman beginnings…. rome started with the latin tribe on the italian peninsula in the tiber

Roman Emperor Nero - . psychotic, yet still memorable presented to you by: eric, eoin , and artie. rise to power. at a