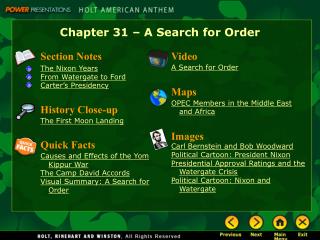 Chapter 31 – A Search for Order

Chapter 31 – A Search for Order

The Nixon Years - . p.666-673. nixon staged a political comeback, being elected president after his loss to kennedy in

The Nixon Presidency - . foreign affairs watergate. what do you know about nixon?. election of 1968. richard nixon

The Nixon Administration - . the southern strategy

Nixon: The Realpolitiker - . the diplomacy of nixon &amp; kissinger. issue no. 1: vietnam, the unmitigated disaster.

Nixon, Ford, and Carter Years - . the nixon administration. 1968- entered in the presidency wanted to lead the nation in

The Nixon Presidency - . 1969 to 1974. nixon promises to bring americans together but. vice president spiro agnew-