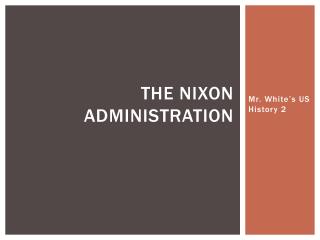 The Nixon Administration. Mr. White’s US History 2. Main Idea and Objectives. Main Idea: President Richard M. Nixon tried to steer the country in a conservative direction and away from federal control . Big Question: What makes an effective, successful leader?

Chapter 24 Section 1 The Nixon Administration - . essential questions:. what were nixon’s plans to lead the nation on a

Nixon and Watergate - . the election of 1968. nixon campaigned as a champion of the &quot; silent majority

THE Rise and Fall of the Nixon Presidency - . richard nixon. president of the u.s. from 1969-1974. vice president under

Richard Nixon - . richard nixon. since 1960, nixon had been burning over his incompetent use of the media. but he was

Richard Nixon - . hall of fame or hall of

An Age of Limits - . in what ways can a president misuse power?. the nixon administration. main idea president richard m.

Richard Nixon and the Rise of Conservatism - . kennedy -nixon: 1960 1968- richard nixon back again! vietnamization of the