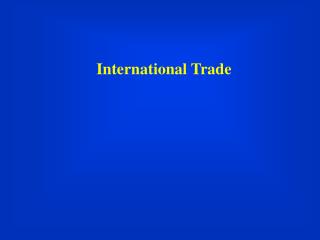 International Trade. Exam: Concepts from Student Presentation. Security Council Reform Why is SC reform on the UN agenda? Which four countries are considered for permanent membership? CEDAW Convention: Is the US a signatory? Why? Role in Women’s Rights Issues ICC: When was it established?