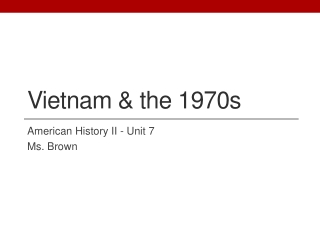 Vietnam & the 1970s. American History II - Unit 7 Ms. Brown. Review. What were the 2 components of the Vietnamization plan? Turn fighting over to the South Vietnamese “Peace with Honor” – withdraw from war with dignity