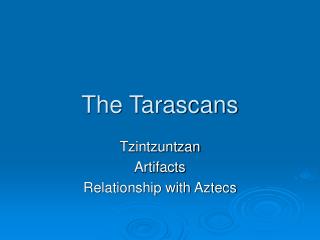 The Tarascans. Tzintzuntzan Artifacts Relationship with Aztecs. The Tarascan. Among the fertile volcanoes of Michoacan Lumholtz came across the Purepecha people, who were called Tarascan by the Spanish. Enemies of the Aztecs, the Tarascans flourished from 1100 A.D. to 1530 A.D.

The Bass, the River, the Review - . you need to know these by tomorrow!. vocabulary. study your vocabulary words!!! learn

The ‘Fate’ of the The Anasazi - . anasazi native americans. the anasazi (&quot;ancient ones&quot;), thought

The Prologue to The Canterbury Tales The Knight The Squire The Yeoman The Prioress - . by geoffrey chaucer 1340?-1400.