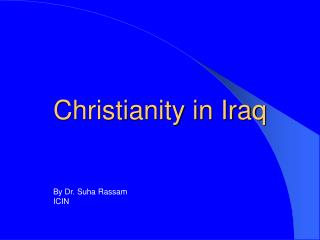 Christianity in Iraq. By Dr. Suha Rassam ICIN. The Matrix. Mesopotamia under Persians /Zoroastrian The Rest of ME under the Romans/Pagans. The two empires in conflict The majority of the population were Pagans A large Jewish community in Iraq/exiles. Evangelisation.

Army of Assyrian Christians - Assyrian christians in the nineveh plains, with the help of a group of americans, are

The Middle East - . countries of the middle east. iran, afghanistan,pakistan,tajikistan,

Cornell Notes(People of Southwest Asia) - . today we will be focusing on: the differences between an ethnic group and a

a. Explain the differences between an ethnic group and a religious group. - Ss7g8 the student will describe the diverse

Heirs of Rome and Persia - . bellwork - 3/25/2014. copy the information from the board into your planner. then answer the

Ancient Mesopotamian Religion - . the western religious traditions (judaism, christianity, and islam) may be traced to a

Ethnic Conflicts Around the World - . ap human geography. ethiopia/eritrea – the horn of africa. both were italian

Chapter 6 “Religion” - . religions of the world. this next slide contains a map that was on last year’s ap final

THE MONGOL EMPIRE - . formed in 1206 when genghis united the warring tribes of mongolia laid siege to china in 1209

Ancient Israel - . historical overview. ancient israel is the birthplace of the 3 great monotheistic religions of the