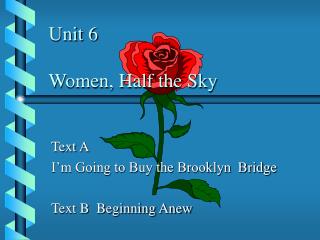 Unit 6 Women, Half the Sky

Unit 6 Women, Half the Sky Unit 6 Women, Half the Sky - . text a i’m going to buy the brooklyn bridge text b beginning anew. lead-in activities. Women Hold Up Half the Sky… Chinese Proverb - . in their own words…. insights from notable women. when one door of

Background - . poe’s childhood. poe lost both of his parents at an early age. his mother, eliza, was an actress who

Unit 1 Half a Day Naguib Mahfouz - . part Ⅳ teaching objectives: to get the students to finish the exercises related to

HGS 12 – 20 th Century Background Information Part I - . this presentation was designed for hgs 12 students at millwood

Background - Introduction to the eu marine strategy directive: background, state of play and perspectives presented by:

Unit6 Global warming - . can you tell what we use energy for? energy lights our cities energy heats our buildings energy