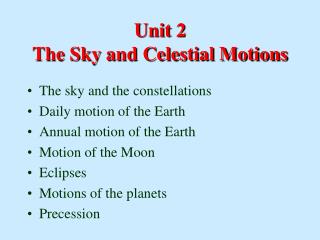 Motions on the sky: The celestial sphere - . star trails. the diurnal motion. the diurnal

Celestial Motions and Time - . solar time. time measured with respect to the sun. apparent solar day is the interval

Motions of the Celestial Sphere - . constellations. sky looks like a dome with the star painted on the inside. 88

Motions in the Sky - . watchers and timekeepers. the milky way over utah. felix shih’s work. the first science. unless

Motions in the Sky - . watchers and timekeepers. the milky way over utah. the first science. unless you were a

Apparent motions of the Celestial Objects - . do not write what is in yellow . definitions. celestial sphere :

Motions of the Earth and Sky I - . outline for today. history: flat vs. spherical earth map of the sky constellations

Chapter 2: Patterns in the Sky – Motions of Earth - . looking around the sky: what are the constellations?. every