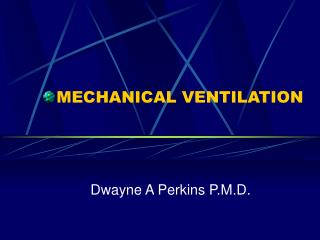 MECHANICAL VENTILATION . Dwayne A Perkins P.M.D. Introduction. In order to survive we have to be able to extract oxygen from the atmosphere and transport it to cells where it is utilized for essential metabolic processes. . Negative Pressure .

MECHANICAL VENTILATION - . things “i” wish i knew when i was an intern amit gupta, md internal medicine north

Mechanical Ventilation - . wollongong cgd, october 31. “if you take a dead animal and blow air through its larynx