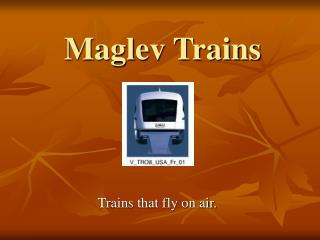 Maglev Trains - . period 1 group #1. what is a maglev train?. maglev trains, maglev short for magnetic-levitation, are

MAGLEV - . an introduction to magnetic levitation and its applications. problem. current land transportation is slow land

Maglev - When a train is running here,a butterfly is sleeping on the way of the train,without any movement,what will

Maglev Train - . a presentation by hessel and sam.

MagLev Elevator - . +. salient points of the project. the basic difference between a mechanical or a hydraulic elevator