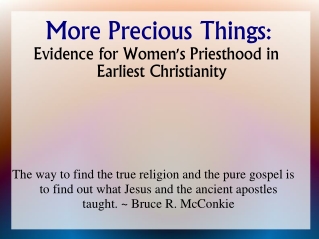 More Precious Things:. Evidence for Women's Priesthood in Earliest Christianity. The way to find the true religion and the pure gospel is to find out what Jesus and the ancient apostles taught. ~ Bruce R. McConkie. About Me. “Evangelical Mutt” Member of the Evangelical Covenant Church