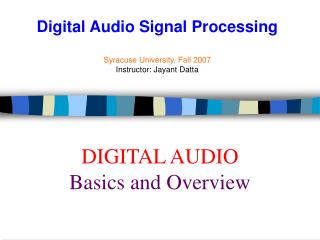 Digital Audio Basics - . digital audio basics. objectives. in this class, you will learn about mp3 players and their

Chapter 6 Basics of Digital Audio - . 6.1 digitization of sound. what is sound? • sound is a wave phenomenon like

Chapter 6 Basics of Digital Audio - 6.1 digitization of sound. what is

Audio Basics - . chapter 6. ch. 6 objectives. explain the function of audio for television identify the most common use

Digital Audio - . sound:multimedia. sound (and its derivatives; speech, music, etc., generally referred to, if audible to

Audio Production Basics - . pros and cons of digital recording. pros â€“ much easier for the average person. much