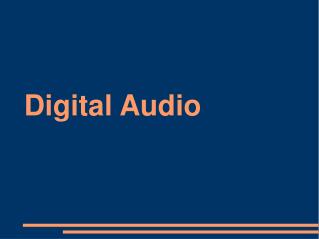 Digital Audio. Sound:Multimedia. Sound (and its derivatives; speech, music, etc., generally referred to, if audible to humans, as audio ) has a significant part to play in multimedia applications Digital Audio - . mics and connections. microphones. condenser: microphone consisting of a capacitor with one plate fixed

Digital Audio - . what is digital audio?what are the main differences between a digital and analogue audio signal?what is

digital audio - . in digital audio, the purpose of binary numbers is to express the values of samples that represent

Digital Audio - . sound is a continuous wave that travels through the air the wave is made up of pressure differences.

Chapter 6 Basics of Digital Audio - 6.1 digitization of sound. what is