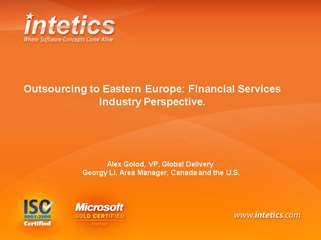 This presentation shows Eastern Europe as an emerging destination for financial services industry outsourcing. It reveals the latest social and economic trends in this region and dwells upon the question why the economic crisis can have a positive impact on development of the outsourcing industry in Eastern Europe. Special emphasis is made on Ukraine as the country with a large unrevealed potential of business process outsourcing possibilities and a great talent pool for R&D and IT outsourcing for financial services companies. Competitive Services Industry - . brad nelson bradley.nelson@osd.mil office of the under secretary of defense for

Western &amp; Eastern Europe - . 2000 bc – 476 ad ancient greece and rome established a standard of excellence by