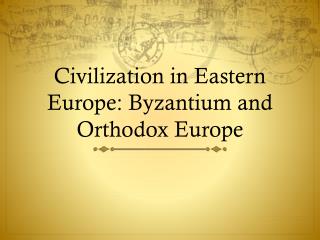 Civilization in Eastern Europe: Byzantium and Orthodox Europe. Marinate on this…. Byzantium serves as a bridge between what we learned in the last unit about the Roman Empire, and what we will learn in the next unit about Medieval Europe. History of the Turkic speaking peoples in Europe before the Ottomans - . eastern europe from the 4 th to the 10th

11.2 The Russian Empire - . russia grows out of a blending of slavic and byzantine cultures and adopts eastern orthodox

Geography of Europe - . ch. 9.1 study the geography of the europe and the eurasian land mass, including its location,