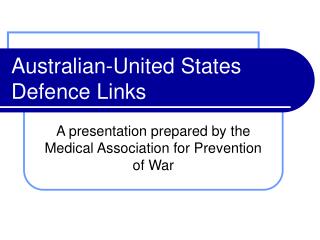 The Australian Mandatory Pensions System - . donald duval. agenda. background what did australia do? why? where is the

Alliances and ANZUS - . yet another acronym…. anzus = australia new zealand united states but it doesn ’ t include nz

History of the Australian Army Cadets - . learning objective. by having an understanding of the history and organisation

Australia and Japan Trade - . by: antoine taouk, jason abou-garrach and mary el-azzi. contents. (some topics may take up

Focus Area 5A4 Australia in Its Regional and Global Contexts - . aid. syllabus agenda. at least one regional and global

Australia’s Federation - . by summer. why and how did australia become a nation?.

Nationalism - . a nd the creation of the new federation and the resultant social