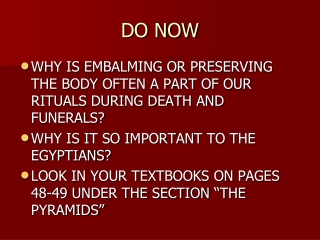 DO NOW. WHY IS EMBALMING OR PRESERVING THE BODY OFTEN A PART OF OUR RITUALS DURING DEATH AND FUNERALS? WHY IS IT SO IMPORTANT TO THE EGYPTIANS? LOOK IN YOUR TEXTBOOKS ON PAGES 48-49 UNDER THE SECTION “THE PYRAMIDS”. Chapter 3. India and China. 1. India subcontinent.

Chapter 13 – Spread of Chinese Civilization: - . japan, korea, and vietnam. japan, vietnam, and korea – each of these

Ancient Chinese Civilizations - . chinese river civilizations. huang he the yellow river, aka china’s sorrow because of

12.4 Feudal Powers in Japan - 4. 12.4 feudal powers in japan. japanese civilization is shaped by cultural borrowing from

The Chinese Language - . is the oldest, continuous written language in the world first written over 4,500 years ago the

Explicit Teaching (of writing) - . also known as. successful strategies for successful students. what is explicit

Introduction to Mandarin - . a functional

Chapter 14 China Section 1 China Reunifies - . entry task. using the map of china… what are the natural barriers? where

Culture of Japan - . japan is located in asia. japan is an island. climate and terrain. climate : varies from tropical in