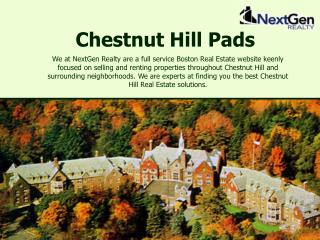 Chestnut Hill is considered to be one of the most affluent neighborhoods in the United States. It has a wide-range of estates and mansions regularly selling for multi-millions of dollars. All the village’s country estates and mansions are examples of the historical architecture. Instances include Colonial, Italianate, Shingle Tudor, and Victorian styles. Chestnut Hill is a quaint, suburban village located just a short six miles west of downtown Boston. It was not an incorporated municipal; however, it encompasses part of three separate municipalities; each in its own county. It’s name refers to a series of small hills that overlook the Chestnut Hill Reservoir rather than one particular hill in the region. Chestnut Hiill is best known as the home of the Eagles of Boston College. Its campus is an early example of Collegiate Gothic architecture. Due to the significance of its landscapes and architecture, it has designated parts in the National Register of Historic Places.