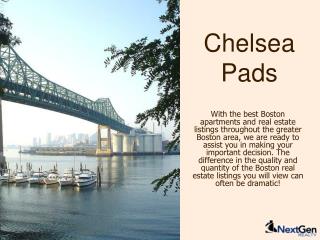 Chelsea offers a glorious setting, restored downtown, civic center, and hilly views of the harbor and downtown skyline. Tobin Bridge looms over the city, it is a landmark that is stunning seen from below. The bridge and harbor setting highlight Chelsea’s traditional role as a gateway into Boston. The area front Boston Harbor by the merging og two rives. The Mystic River lies to the west and the wide Chelsea Creek lies in the northeast. It has been a natural way station for products and people traveling into Boston from the moment its first European settler stepped foot on land. As the metropolitan area began to grow, Chelsea became a welcome haven! It offered inexpensive housing, numerous job opportunities, and supportive social services. The city is heavily influenced by its immigrants. Chelsea is a dynamic city, open to immigrant diversity, influenced by ethnic traditions through the street life, restaurants, and shops.; making it the ideal location to live. /nChelsea has continued to rebuild and construct their city, each time with a remarkable eagerness and determination. The pride, and spirit of cooperation and new leadership, make a difference, and is portrayed in the atmosphere of Chelsea. There are now hundreds of thriving businesses proud to call Chelsea their home. Although it is a noticeable industrial, there are also many other important assets. There are three-lined streets with affordable, well-kept homes, ballparks, playgrounds, phenomenal schools, and a friendly downtown. A popular location is the Mystic River Reservation; opened year round. It has become known as one of the Commonwealth’s best protected streams. Chelsea location has been excellent, the neighborhoods have always been safe and friendly, and the workforce extraordinary. Chelsea is the area of you! Increase Outreach through Co-Branding - . question: how was the small rural city of chelsea, michigan able to become a