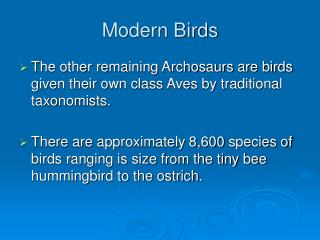 Modern Birds The other remaining Archosaurs are birds given their own class Aves by traditional taxonomists. There are approximately 8,600 species of birds ranging is size from the tiny bee hummingbird to the ostrich. Bee hummingbird http://images.encarta.msn.com/xrefmedia/sharemed/targets/

Review Modern Physics, Ph 311 - . it was found that there was no displacement of the interference fringes, so that the

BIRDS - . a study guide. raptors!. part 1. bald eagle!. golden eagle!. like all eagles, it belongs to the family

Domesticated Birds - . small animal care . parrot family. contains some of the smartest birds many species can be taught

Birds of a Feather: Enterprise Condor Use Cases - . jason stowe. condor in “enterprises”. experience in production