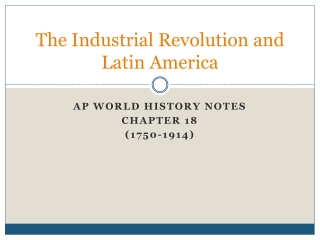 The Industrial Revolution and Latin America

The Industrial Revolution and Latin America

Physical Geography of the United States and Canada: A Land of Contrasts - . north america’s vast land and varied

5 Themes of Geography for the Caribbean - . location. relative: the caribbean is directly south of the usa, east of

Latin America - . focus. again, we will focus on the forces that acted on latin america latin american agency not

Human Geography of South Asia: A Region of Contrasts - . both south asia’s rich and ancient history, and its religious

Latin America and the Caribbean: environmental priorities in a region of contrasts - . xix meeting of the forum of