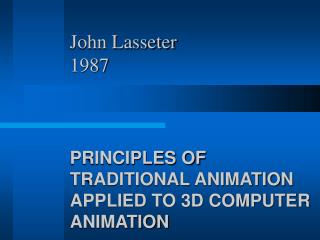 animation! - Animation is a 2d or 3d art work of moving images. from the past till now animation has gotten better

Effects of Income Imputation on Traditional Poverty Estimates 1987-2007 - . the views expressed here are the authors and

Animation - . animation. a simulation of movement or the perception of motion created by displaying a series of pictures

Notes - . make sure you are working on assignment 0 textbook reference for splines: section 3.1 and appendix b4.

Traditional and Computer Animation - . by nic kramer. introduction. history of animation what is animation animating with

What is Animation? - Any visual change over time adds power simple visual effects (transitions) add variety but, what is